Sunidhi Chauhan gets his name due to his popularity, but in reality, his name is Nidhi Chauhan. Sunidhi Chauhan is the most famous Indian playback singer and actress. She was born on 14 August 1983 in New Delhi, India. She is the daughter of Dushyant Kumar Chauhan ( Theatre Artist at Shriram Bhartiya Kala Kendra) and his younger sister is Sneha Chauhan. She was married to his first husband Bobby Khan (Director/Choreographer)  in 2002 and She is married to his second husband Hitesh Sonik (Music Composer) in 2012. She has a son Tegh Sonik was born on 1 January 2018.

Sunidhi started performing at local gatherings and competitions at the age of 4. She appeared as the lead singer in music director Kalyanji’s Little Wonder Troupe at the age of 8. 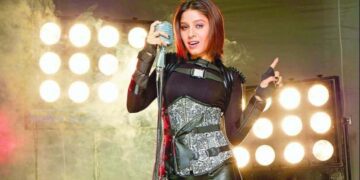 32. Chipkali चिपकली (Tara The Journey Of Love And Passion) Lyrics