Anuradha is a Famous Indian Playback Singer. She is Works in Bollywood. Anuradha was born on 27 October 1954  in a Marathi Family at Karwar, Bombay, and Anuradha’s Nickname / Birth Name is  Alka Nadkarni. She was married to Arun Paudwal (Music Composer) but Her husband died in 1991.

Anuradha has 2 children:- Son Aditya Paudwal (died on 12 September 2020 at the age of 35 due to kidney failure ). And her daughter Kavita Paudwal is a Famous  Indian singer.

Her Favourite Singers are Lata Mangeskar and Kishor Kumar.

She was awarded the Padma Shri award, the fourth highest civilian award by the Government of India in 2017. Also, four times awarded by Filmfare Award and National Film Fare Award. The most famous song is “Dhak Dhak Karne Laga”. 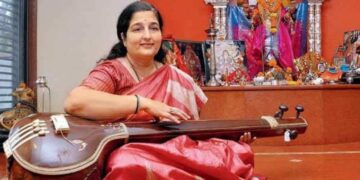