Suresh Wadkar is the most famous Indian Playback singer. He was born on 7 August 1955 in Kolhapur, Maharashtra. He was married to Padma Wadkar (Playback Singer) in July 1998. He has two daughters who are Jiya Wadkar (Singer) and Ananya Wadkar (Singer).

Suresh started learning music at the age of 8. In 1976, he participated in a singing competition show and emerged as a winner of the show. In 1977, Ravinder Jain was offered a big opportunity to sing the film “Paheli”. He sings songs in many hit movies. He has played the part of a Judge in the famous singing reality show “Sa Re Ga Ma Pa Li’l International”.

He has been awarded many awards in different-different years, In 1976, the “Madan Mohan Best Playback Singer Award” at the “Sur-Singer Competition”, In 1986, “Best Male Playback Singer Award” at BFJA Award for the song “Teri Ganga Maili”, In 2004, the “Lata Mangeshkar Puruskar” by the “Government of Madhya Pradesh”, In 2007, the “Maharashtra Pride Award” by the “Maharashtra Government”, In 2011, the “National Film Award” for “Best Male Playback Singer” for the song “Hey Bhaskara Kshitija Vari Ya”, In 2017, the “Late Sadashiv Amarapukar Award” by “Ahemadnagar’s Think Global Foundation”, In 2020, the “Padma Shri” by the “Government of India”. 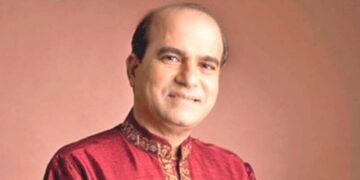