Atif Aslam is a Famous Pakistani Playback Singer and songwriter. He was born on 12 March 1983 in a Muslim family in Wazirabad, Punjab, Pakistan. He is the son of Muhammad Aslam and Rehana Shaheen. His 3 brothers are Shahbaz (Designer), Shahzad (Photographer), Sheraz, and his sister is Romana. Atif was married to Sara Bharwana (Educationist) in 2013 and his son is Ahad was born in 2014.

He is one of the best playback singers in Pakistan and the Indian music industry. In 2008, Atif was honored by Tamgha-e-Imtiaz from Pakistan Government. And Also,  He has been awarded by the Dubai Walk of Fame for best singer in Pakistan. 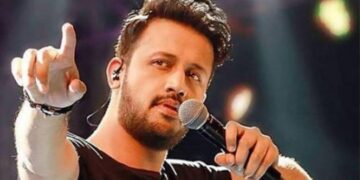