Sharda is known as Kavita Krishnamurthy. Kavita is the most famous Indian playback singer. She was born on 25 January 1958 in a Tamil Iyer family in New Delhi, India. She is the daughter of T.S. Krishnamurthy (An Employee of The Education Ministry) and Kamakshi Krishnamurthy. She was married to Pandit Dr. Lakshminarayan Subramaniam (Violinist) on 11 November 1999. She has 2 sons named Narayana Subramaniam, Foster (Doctor), Ambi Subramaniam, Foster (Violinist), and a daughter named Gingger Shankar, Foster (Singer).

Her favorite singers are Lata Mangeshkar, A.R. Rehman and his favorite director are Mani Ratnam.

She moved to Bombay to try her luck in Bollywood at the age of 14. Her aunt, Protima Bhattacharya, got trained in music, and Suruma Basu trained her in “Rabindra Sangeet”.

In 1978, She sang in Ondanondu Kaaladaga, Title track, Kannada. In 1980, She has singing a song “Kaahe Ko Byahe” for the film “Maang Bharo Sajna”. 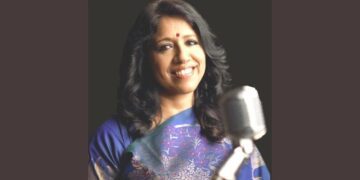