Amit Trivedi is a popular Indian playback singer, Music Director and song lyricist, who works for Bollywood movies. Amit Trivedi born on 8 April 1979. He also had working experience in theater as a jingle composer and composing non-films albums. He composed the first non-films album in 2008 with the name “Aamir”.

Amit Trivedi is  a married man, his wife’s name is “Krutee desai trivedi”. This couple has blessed a son ‘Yaman trivedi’. He loves to travel.  Amit Trivedi was born in Bandra, Mumbai, His family belongs to a traditional Gujarati family. And he Growing up, his only connection with music was devotional songs and Gujarati folk. Inshort, Ahmedabad Gujarat is his hometown where grown up .

He started his musical career from his college where he  joined a fusion band called “Om”. In 2008, He Directed his first non-film composer album “Aamir”.but this album got rejected due to his low budget of promotion. In Bollywood he did not get any chances to sing. He had to face struggles in his life. During his struggle he started to make ads- jingle for company promotion he made jingles music for Mcdonal and sony BMG and also made the tv serials background music records.

Amit composed some songs for the Abhijeet Sawant directed film “Junoon”, singer shilpa rao introduced him to the director Anurag kashyap, who wants a Music composer to compose his upcoming movie Dev-D songs. Amit Trivedi got limelight after he did accumulated work in Dev-D as a singer. Dev D became the turning point for him, after that he got many offers  to compose and for singing. Amit trivedi composed many movies songs such as:English VinglishWake Up Sid,QueenShaandaar, Udta Punjab Bombay Velvet Dear Zindagi,Secret Superstarand many more.  These all songs are tremendously hit songs 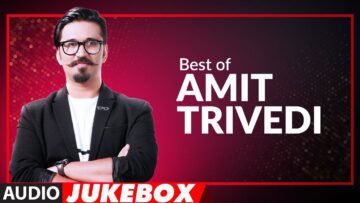