Usha Mangeshkar was an Indian playback singer her favorite genres are traditional songs, folk songs, and Indian classical songs. She is especially known for her elder “Lata Mangeshkar.

She was also a great singer in her timeline like her late sister. She is famous for her song “Jai Santoshi maa” at her time this devotional song became a superhit in 1975.

She was born on 15 December 1985, (85 years old in 2020) in  Indore, Madhya Pradesh, India. She belongs to a Marathi classical musical family. Her father also had great taste in music. Her father is named “Pandit Deenanath Mangeshkar” and mother’s named  “Shevanti (Shudhamati)”.Her siblings are “Lata Mangeshkar” (legendary singer), “Asha Bhosle” (Singer), Meena khadikar, and one brother also (a music director).

She has a strong interest in painting also.

She started her music career by singing the song “Badi Dhoom Dham se meri bhabhi aayi” in the film “Subha ka tara” in 1954. And her second song was “Aplam Chaplam” from Azaad in 1955. She recorded many songs in different languages like  Marathi, Hindi, Bengali, Kannada, Gujarati, and Assamese songs.

Her Marathi song “mungda” was a hit song all over India from the film Pinjara. She also produced the musical-drama film “Phoolwanti’ which was broadcast on Doordarshan. 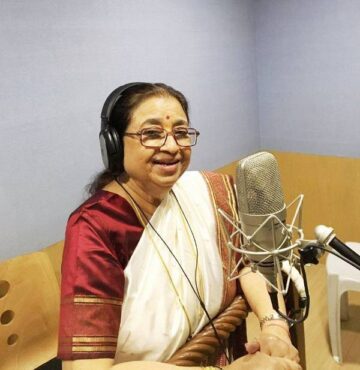