Tripti Shakya is a versatile playback singer, singing for the last 25 years. She is from Etawah.  She was born on 5 august  in Etawah(UP) and brought up in Allahabad(UP). Tripti commands seven languages- Hindi, Bhojpuri, Bengali, Rajasthani, Punjabi, Sanskrit and Nepali. At The  age of 18 years her first audio was released and since then she has been achieving laurels in the world of music. She has  More than 700 audio and video albums that  have been released by T-series, Tip, Venus, HMV, yuki, JMD Sounds, Chanda, Sontek and others companies. She has  completed her Master Degree in English from Allahabad University. Degree of Sangget Prabhakar in vocal music. Tripati is famous for her voice and also for Hindi films like Pyar ka bokhar, Barood, Sajan chale sasural, Insaaf, Chattan, Suhagan and Bhojpuri films like Piritiya ke Dushman, Maayi Jaisan bhauji hamar, Thave wali maiya etc. Her famous album  “Kabhi Ram Banke Kabhi Shyam banke” achieved great success worldwide. 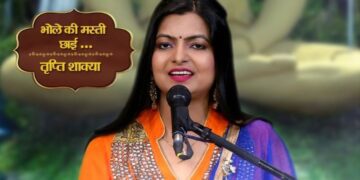