Satguru Kabir Das (1398/1440 – 1448/1518) was a 15th-century Indian mystic poet and saint, whose writings influenced Hinduism Is Bhakti movement and his verses are found in Sikhism’s scripture Guru Granth Sahib and Kabir Sagar. Satguru kabir das is a poet and a big bhajan singer.Born in the city of Varanasi in Uttar Pradesh, he is known for being critical of both organized religion and religions. He questioned meaningless and unethical practices of all religions primarily the wrong practices in Hindu and Muslim religion.

The hallmark of Kabir’s works consists of his two line couplets, known as the ‘Kabir ke Dohe’. The Dohas reflect the deep philosophical thinking of the poet saint.

The Philosophy of Satguru Kabir Saheb.Kabir Saheb was born in 1398 (Samvat 1455), on the full moon day of Jyeshtha month at the time of Brahma Muhurta. There is a considerable  scholarly debate on the circumstances surrounding Kabir’s birth. 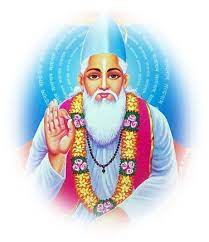