Kavita Paudwal is an Indian singer and Composer and also a songwriter. She was born in Mumbai Maharashtra, she is the daughter of legendary bhajan singer Anuradha paudwal and Arun paudwal, she started her musical career at the age of 13 with Mahesh Bhatt’s film Junoon. And she has been singing bhajan since 1995, and after that, she has given so many hit bhajan songs, and at the age of 16, she composed the music of two films. She has also launched 40 devotional music CDs with T-series and she has sung that bhajan with co-singer Sonu Nigam, Shaan, Hariharan, and Javed Ali.

She was born to a music composer father Arun Paudwal and a playback singer mother Anuradha Paudwal. Her father died on 01-11-1991. She had a music composer brother named Aditya Paudwal who died from kidney failure on 12-09-2020. She is married to Niteen Tulpule, founder of Sirona Diagnostics and Specialty Clinic, Mumbai. Together the couple has two children including a son and a daughter. 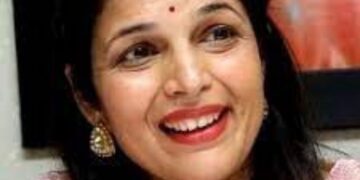