Bhoomi Trivedi is a female Bollywood singer. His date of birth is 23 August 1988 (age 33) Vadodara, Gujarat, India. She is the runner up in the finale of famous music show ‘“Indian Idol season 5th”.

She belongs to a middle-class family. Her father was an ordinary railway employee but he was interested in singing too. Her mother was a folk singer who had her own singing group and she was also primary music teacher of the bhoomi in her childhood. Bhoomi started singing at the age of 8 years.

She started her career in Bollywood with the song “Bahne Dey” from the film “Prem mayee” in 2012. But she got recognised, when she got an opportunity to give her beautiful voice in the song of “ram chahe leela” for the film “Goliyon Ki Raasleela: Ram-Leela” she was selected by director “sanjay leela bhansali”. After that she sang many Notable songs like: “Husn Parcham” “Udi Udi Jaye” “Dance Ke Legend” and “Na Duniya Mangi Hai” and many more. 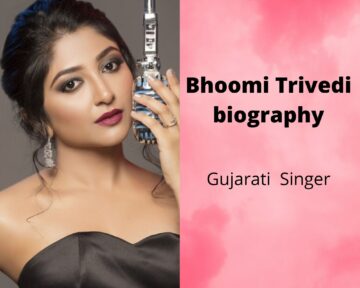