I have felt very sad about leaving this physical life by Late Shri Bhagat Ramniwas Ji (September 18 at 09 PM). Bhagat Ji continued to sing bhajans even at the age of 65. The era in which he left the army job and connected with the common people through warning hymns must have been very difficult for him.

People used to call him affectionately Mohammad Rafi of Haryana. If you also listen to his hymns, then you will feel how he has sung the hymns with his soul. The world knows Bhagat Ji just because of his hymns, which is a big deal. Bhagat Ramniwas Ji sang such hymns which went on the common man’s tongue.

Shri Ram Niwas Ji left the army job in 1965, the hymn which was put on the tongue of the people was “Tune Ajab Racha Toy Mati Ka” In his personal life, he maintained simplicity as his basis. Bhagat Ji was born in Sunaria village of Rohtak district of Haryana. Apart from Bhajans, Bhagat Ji has also sung patriotic songs. 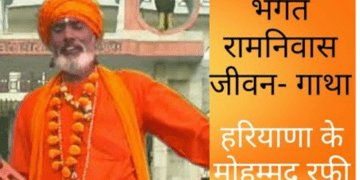