Anurag kulkarni is an indian playback singer, Music composer and songwriter. He sang in the tamil- telegu movie in india. He is a self made star singer. He is 30 years old, born on 7th June 1993 in Hyderabad, Telangana.

He passed his schooling from a local school in Hyderabad. He graduated in computer Engineering from Vignan Institute of Technology. He worked in a software company for some years. After that he started singing and won a singing competition show which  was the 8th season of the show.

Anurag belongs to a marathi family he was born in Kamareddy in Telangana. He is single. He does many singing tv shows and live concerts.his hobbies are vocals and playing piano and his zodiac sign is Gemini.

He started his music career after leaving his job at a software company. He started learning singing and playing musical instruments from late Kakunoori Jangaiah guru in telangana this guru is a great vocalist of hindustani vocals. After winning a reality music show, he got an offer to sing from the telugu star music composer Ajay Arsada in the song “Manasuna” film named “Jagannatakam” in 2015. Then, he participated in many more songs in tamil telugu movies. He got many offers for singing  from many music directors and songwriters. Anurag Kulkarni became popular with the song Pilla Ra from RX 100 which was released in 2018. He gives many hits songs continuously, such as:

In an interview with “cinema express” he said that he recorded approx. 800 songs in telugu movies. 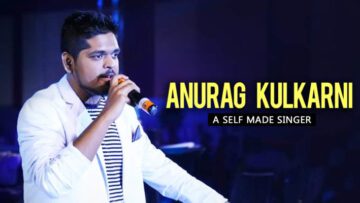