Anup Jalota is a Bhakti and Ghazal singer. He is known for his performances in Hindu devotional music, bhajans, and the Urdu poem, Ghazals. He was born on 29 July 1953 in Nainital. He started his music career with stage performances with legendary singer Kishore Kumar, due to which he became famous as Junior Kishore. After his struggling days in Mumbai, he got a job as a chorus singer at All India Radio. He is often referred to as the Bhajan Emperor of India because of his divine singing. He has performed over 5000 live concerts around the world. He was awarded the Padma Shri in 2012. He was a contestant in the reality show Bigg Boss 12. In 2015, he played the role of the famous spiritual guru Sathya Sai Baba in the movie “Satya Sai Baba”. He was educated in music by his father Purushottam Das Jalota and Bhatkhande Sangeet Sansthan in Lucknow.

His father’s name was Purushottam Das Jalota, he was a famous bhajan singer. He has two younger brothers:- Anil Jalota and Ajay Jalota and two sisters, Anjali Dheer and Anita Mehra. He is also known as Bhajan Samrat.

His first marriage was to Sonali Sheth, an ethnic-Gujarati girl. His second marriage was to Bina Bhatia which soon ended in divorce. Anoop’s third marriage was to Medha Gujral, the niece of former Indian Prime Minister IK Gujral and director Shekhar Kapur’s first wife, from whom he divorced in 1994. Anoop and Medha had a son, Aryaman, born in 1996, who studied at Princeton University. Medha Jalota died on 25 November 2014 at a hospital in New York City of liver failure following a second heart and first kidney transplant. 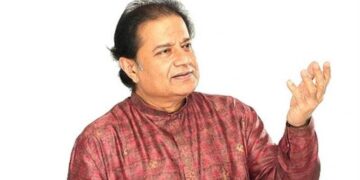