Zahid Nazan is a qawwali playback singer of India He is particularly remembered for the genre known as Qawwali. He was born on 7 may 1938 in india, he is a big famous and popular singer in india. He was born in a Muslim family His family, having fundamental Muslim faith, did not like music, as music is considered as evil in Islam. But he was so passionate about music so he continued it secretly. Every time he was traced singing by his family members, he was punished badly, but he didn’t give up, and continued his singing career.

He joined the famous Qawwal, “Hame to loot liya mil ke husn walon ne” fame Ismail Azad’s party as a chorus singer. Gradually he got recognition as an individual qawwal. He was very much inspired by the veteran Qawwal Ismail Azad’s style of singing and composing the music, in his childhood. In his early career he followed him, but soon he developed his own style and his style got a significance with time.

The songs sing by the famous Qawwali singer Zahid Nazan 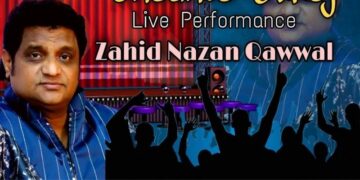