Vani Jairam, who was born on 30 November 1945 in Vellore, Tamil Nadu, is an Indian playback singer. Her career as a playback singer started in 1971 and worked for more than five decades. In her singing career, she has recorded over 10,000 songs for more than 1 thousand Indian movies. Besides, she has done playback for thousands of devotionals and private albums. She is also famous for her live concert and has performed a number of solo concerts in India as well as abroad.

Vani was very famous for his vocal range and can easily handle any difficult composition that’s why she has been the favorite vocalist for many composers in the film industry throughout her career. She got the opportunity to sing in several Indian languages, such as Marathi, Odia, Gujarati, Haryanvi, Kannada, Tamil, Hindi, Telugu, Malayalam, Assamese, Tulu, and Bengali languages.

As far as her awards are concerned, she was given three times the National Film Award for Best Female Playback Singer and she also bagged State Government awards from the states of Odisha, Andhra Pradesh, Tamil Nadu, and Gujarat. In regard to her service to South Indian film music as a singer, she was conferred with the Filmfare Lifetime Achievement Award – South. In 2017 she also won the Best Female Singer at the NAFA 2017 event in New York City, extending her list of achievements.

The birthplace of Vani was Vellore in Tamil Nadu. she belong to a classically trained musicians family of Tamil Nadu and was the fifth among nine sisters and brothers. Her father Duraisamy Iyengar, and her mother Padmavathi trained herself in classical music taking training under Ranga Ramunaja Iyengar. She was also enrolled under the Ranga Ramunaja Iyengar to learn a Muthuswami Dikshitar kritis. After that, she was provided with formal Carnatic training from the well-known Kadalur Srinivas Iyengar, T. R. Balasubramanian, and R. S. Mani.

Vani was fortunate as she got such an in-laws family that supported music. Mrs. Padma Swaminathan, her mother in laws, was a social activist and Carnatic music singer.

Vani was fond of the Radio Ceylon channel and was passionate about Hindi film songs too much.

She was eight when she performed her first performance at All India Radio, Madras. She graduated from Queen Mary’s College, Madras University, and also worked with the State Bank of India, Madras, and then later in 1967, She got transferred to the Hyderabad branch.

In 1969, She moved to Mumbai with her husband to pursue her dream. Her bank also transferred her to the Mumbai branch at her request.

Seeing her passion for music, Jairam convinced her to get training in Indian classical music and to study music further, she started learning music under the guidance of Ustad Abdul Rehman Khan of the Patiala Gharana. To choose music as a profession, She had to quit her bank job.

She started to learn different variations of vocal forms like Bhajan, Thumri, and Ghazal under the guidance of khan and got the opportunity to give her first public concert in 1969.

In 1969, She got the chance to meet the composer Vasant Desai who was working on a Marathi album with vocalist Kumar Gandharva. After seeing her talent, Desai got her to sing the song “Runanubandhacha” for his album with Kumar Gandharva, and the album and their duet song became very popular among the Marathi audience.

She also collaborated with the legendary vocalist of agra charan Pt. Dinkar Kaikini in the Movie “ Meera” and the music of the movie was composed by the veteran Pt. Ravi Shankar.

In her career, she has been lucky to get the chance to work with prominent music directors in India like O.P. Nayyar, R. D. Burman, Kalyanji Anandji, Laxmikant Pyarelal, Chitragupta, Naushad, Asha Bhosle, Madan Mohan, and Jaidev and there are many prominent music directors of the south wi including K. V. Mahadevan, M. K. Arjunan, Jerry AmaldevIlayaraaja, M. S. Viswanathan, M. B. Sreenivasan, and Bengali music director Salil Chowdhary.

Vani is extremely proficient and adept at singing a wide variety of songs, like traditional Indian music, pop, folk songs, ghazals, and bhajans. She also got a chance to record Holi Songs, Bhajans, and Thumri Dadra along with Pandit Birju Maharaj.

Vani also collaborated with Odissi Guru Kelucharan Mohapatra while recording “ Gita Govindam and the music of her song collection named “Murugan Songs” was also not only written but also composed by her. 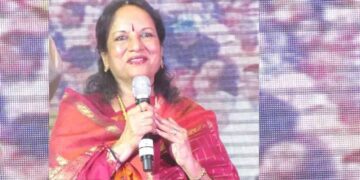