Vaishali Mhade is an Indian-marathi female playback singer. Who primarily work for the marathi film industry. She sang many superhit songs in Bollywood too. She is famous for her song “pinga” from the film “Bajirao mastani’.

Vaishali mhade was born on 21 August 1984, Khartalegaon Amravati, Maharashtra in  India. Vaishali Mhade is married to “Anant Mhade” in hinganghat, Maharashtra. They both have been blessed with one Daughter. Her hobbies are listening to music and watching movies.

She completed her schooling from shri shivaji high school in Khartalegaon, Bhatkuli in

She first came in front of an audience in Sa re ga ma challenges, a music reality show.

She sang in advertisement rhythm jungle songs and started to earn some money. She made her bollywood debut with a duet song “Hum tum” in the movie “Damadamm” with himesh reshamiyan in 2011.

She lent her voice in the title song of  ‘Honar Sun Me Ya Gharchi’, a popular Marathi show on  Zee Marathi.

Vinayaka Gajanana Pinga Ye Naa Gade all of these songs has separated fan’base. 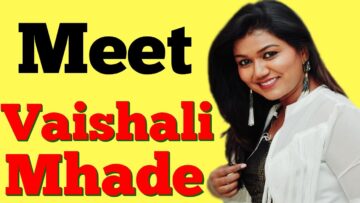