Usha Khanna is known as a well-known woman music director in Indian Hindi cinema. Despite being a woman, she chose a field that was controlled by men because of her keen interest in music, and after Jaddan Bai and Saraswati Devi, she became the third successful female music director in the Indian Film Industry.

She served the film industry with her talent for more than 3 decades from the1960s to the 1980s. She also got a nomination for a prestigious Filmfare Award for composing beautiful songs for the successful movie Souten in 1983.

Usha was born on 7th October 1941 in Gwalior, Madhya Pradesh, India. Her father, Manohar Khanna, was also a famous singer and lyricist. He was a government official as an assistant superintendent and worked for the Gwalior State in the waterworks department.

However, after a meeting with Jaddanbai, the mother of well-known actress Nargis Dutt, he started writing gazals as she requested for Hindi movies using a pen name Javed Anwar.

After that, he started writing gazals for Jaddanbai’s Nargis Art Productions film, “Romeo Juliet”. He was offered Rs 800 for three gazals, which was significantly higher than his monthly pay of Rs 250 as a Government employee.

O.P. Nayyar, a famous music director of Indian cinema, introduced Usha Khanna to Shashadhar Mukherjee, a well-known filmmaker in the Indian film Industry at that time.

After realizing her talent, Shashadhar told her to write songs for him at least two songs daily. After a few months, She got the opportunity to work independently when Shashadhar signed her to work for his movie “Dil Deke Dekho” (1959) as a music composer. The movie was also the first movie for the actress “Asha Parekh” and the movie proved blessed for everyone as it was a huge hit. After seeing the success of “Dil Deke Dekho”, and her dedicated work, Shashadhar hired Khanna for another “Asha Parekh” starring movie “Hum Hindustani” (1961).

Usha composed a number of successful songs as a music composer for Hindi films but she always struggled to establish herself as a music director in the Indian film industry.

She often worked in a team with Asha Bhosle and Mohammed Rafi. Asha used to refer to Khanna as her daughter. The team of three Usha, Asha, and Rafi made a lot of popular songs for the audience together. There are many songs composed by Usha and sung by Rafi such as Dil Deke Dekho(1959), Saajan Ki Saheli(1981), Aap To Aise Na The(1980), etc. These songs are still popular among the audience.

Sawan Kumar, who used to work as a lyricist for Usha Khanna, is a producer, and director in the film industry, Most of the lyrics for her songs have been written by him. She too has composed music for his eleven movies directed and produced by him.

After working together, she married the filmmaker, producer, and lyricist Sawan Kumar Tak, but they later divorced peacefully and started living separately.

There are some songs in which she has worked as a playback singer.

She loved listening to and frequently took inspiration from Arabic music.
Khanna was fascinated by Arabic music throughout his life and used their music as an inspiration for composing music for her films.

K. J. Yesudas won a Filmfare award for one of her songs, “Dil ke tukde tukde,” which she composed for the movie Dada in 1979.

She also contributed to Non-Hindi movies as a music composer.

As she composed the music for the Malayalam film “Moodalmanju” in 1969, and the film’s songs are still popular today among the people. Some of the Malayalam songs composed by her are ‘Nee Madhu Pakaroo’ by K. J. Yesudas and ‘Maanasa Mani veenayil’ by S. Janaki.

Other Malayalam movies in which songs have been composed by the Khanna are “Agni nilavu” and “Puthooram Puthri Unniyarcha”.

She always tried to look for new talent in the industry that’s why she always offered chances to new singers. Some of them are Hemlata, Mohammed Aziz, Shabbir Kumar, Anupama Deshpande, Pankaj Udhas, Roop Kumar Rathod, and Sonu Nigam. Many of them are well-known vocalists today. 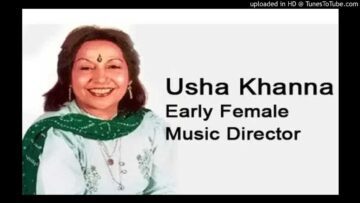