Swarnalatha is an Indian female playback singer. She contributed in almost all Indian languages film industries such as Tamil, Telugu, Malayalam, Hindi, Kannada, Marathi, odissi and Bengali film Industries. She is famous for his sweet voice. She was born on 29 April 1973 in kerala.

Her father’s name was K. C. Cherukutty and her mother were kalyani. Her father was a great singer and harmonium player. She belongs to a fully music-interested family. Her father taught her to play the harmonium and her sister sarjoni was her first singer teacher. She loved to sing hindustani music and classical singing.

She started her music career in 1987 with a duet song with K. J. Yesudas’ song name was “Chinnanchirukiliye Kannamma” from the film “Neethikku Thandanai” . This was an M. S. Viswanathan film. After the success of her first she got many offers to sing from every popular director. She sang many hit songs with great music directors like  A. R. Rahman and Ilaiyaraaja. She made her debut in Hindi songs with the song “Hai Rama Yeh Kya Hua” from the film Rangeela. “Muqabala Muqabala” was One of the famous Hindi songs of Swarnalatha.

She Sang  approx. 10,000 evergreen songs including all languages in her career

After serving in Indian music industries for 24 years she left the world on 12 September 2010 at the age of 37.

She got an National Film Award for the Best Female Playback Singer for the song of “Porale Ponnuthayi” from the film “Karuththamma” and A.R Rahman is the music composer of this song. 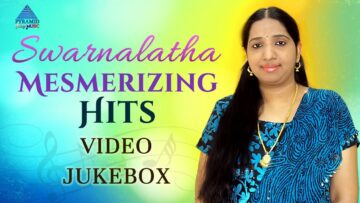