Surjit Bindrakhiya had been unquestionably one of the best bhangra singers throughout his life, particularly in the 1980s, 1990s, and 2000s. God blessed him with a powerful voice that helped him become one of Punjab’s best traditional singers.

Along with traditional singing, he used to sing modern Punjabi pop with heart. He was also famous among the people for his excellent voice while singing Punjabi Boliyan (Punjabi song Medley).

Surjit started his career as a singer in the Punjabi music industry in 1990, working on the album “Addi Utte Ghum”. In this album, there is a track “Jugni,” in which he performed a 32-second Hekh, which is a world record.
Hekh is one of the singing styles in which a singer sings a single note continuously in one breath that sounds high in pitch and can last up to 42 seconds. He also set a Guinness world record by singing Hekh.

One of his songs, “Dupatta Tera Sat Rang Da,” became so popular among both national and international people and got him the first international bhangra music superstar fame. During the 1990s, other musicians started remixing his popular older songs so we can say, as a result of this, Bindrakhiya,s song bridged the gap between contemporary Punjabi Bhangra and traditional folk music.

As far as Surjit Bindrakhiya’s early life is concerned, he was born to Sucha Singh and Gurcharan Kaur in Bindrakh village, Rupnagar district, Punjabi.

Although Surjit’s father was a known wrestler in his village. His father always wanted him to be a wrestler but he wanted to become a singer. Surjit also won some of his Inter-college wrestling bouts but music always topped his list of priorities. So he started to pursue his passion by singing Boliyan for his college’s bhangra squad.

He took his formal training in music from his Guru, Atul Sharma.

Unfortunately, he died from cardiac arrest on November 17, 2003, in his home in Sahibzada Ajit Singh Ji Nagar (Mohali), Punjab, and left behind the inheritance of his popular song for his fans. 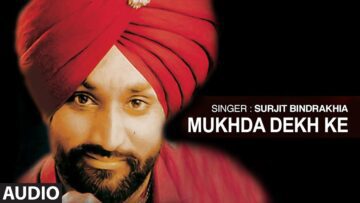