She is a Gujarati, and she was born and carried up in Ahmedabad and rolled to Mumbai to follow singing as a profession after completing her master’s degree in Psychology.

Pathak began her singing profession after singing for various remix albums. She performed “Leke Pehla Pehla Pyaar” in 2004 for the Baby Doll series. Using her track from Fashion, “Mar Jawa” (2008), Pathak became famous. She attained nominations in both Filmfare and Screen Awards for the song. She is also the bard along with the singer of the song “Payaliya” by Dev.D (2009). In 2013 she composed one more melody “Shubhaaramabh” for Amit Trivedi in Kai Po Che.

Pathak has also appeared in each of Coke Studio India’s three seasons. She sang the songs “Glorious” and “Shedding Skin” in season 2, “Kya Haal Sunawan” in season 1, and “Haal Ve Rabba” in season 3. She appeared with Sachin and Jigar in season four of MTV Unplugged. Even the Dewarists support her.
She understood classics from her guru Shree Divyang Thakkar from a very youthful age. 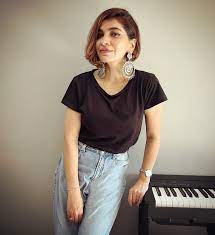