Shobha Gurtu is an Indian classical  Playback Singer. She sang many evergreen songs in her timeline. She was born on 8th February 1925 in Belgaum, Karnataka, India.

“She was also known as thumri Queen”.

Her birth name was Bhanumati shirodhkar. Her mother “Menaka Bai shirodkar” was her first music teacher. Meneka bai shirodhkar was a professional classical Dancer and singer, who was trained by Ustad Alladiya Khan of the Jaipur-Atrauli Gharana. Her husband named “Vishwanath Gutru” after marriage she took her name into “Shobha Gutru”. This couple has three sons “Tilok Gutru” , famed percussionist by profession “Narendra Gutru”, and eldest son “Ravi Gutru” is an rhythm player.

After her mother, she was trained by Ustad Bhurji Khan” the youngest son of “Ustad Alladiya Khan”. She has speciality in pure classical song and tradionals songs. Her talent was recognised by “Begum Ali” and “Bade Ghulam Ali khan” at Ustad Alladiya Khan’s nephew Ustad Natthan Khan home. She also contributes to marathi cinema music as a playback singer. In hindi cinema, she give many superhit and evergreen songs

She got recognised, In 1972 she sang for the kamaal amrohi film “pakeezah” where the song is ‘Bedardi ban gaye koi jao manaao more saiyaan”. She got nominated in 1978 at the Filmfare award as Best Female Playback Singer for the song “Saiyaan Rooth Gaye” from the hit film “Main Tulsi Tere Aangan Ki”. The Gramophone Company of India released their first album about her evergreen career. Album named was “At Her Best– Shobha Gurtu” , considered a high ranking classical singer. In 2000, She gave her voice on lend to featured the national song of our country “Jana Gana Mana” along with other leading classical singers and musicians of India which was released On the 50th year of republic day of india.

After retiring as voice artist from Hindi cinema also known as “thumri Queen” she left the world on 27 September 2004. 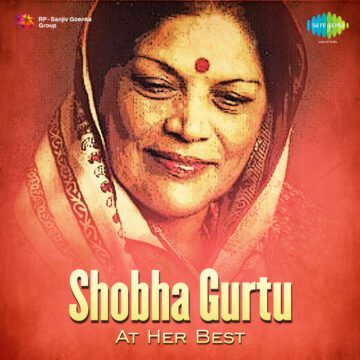