Shivangi Joshi born 18 May 1995 (Age: 26 Years, as in 2021) in Pune, Maharashtra, India is an Indian television actress. She got huge fame and popularity from the role of Naira Kartik Goenka in the Television serial Yeh Rishta Kya Kehlata Hai. She has been impressing everyone with her acting prowess and has been a part of the hit daily soap Yeh Rishta Kya Kehlata Hai, for many years now.

She is most popular as Naira Goenka in the daily TV soap “Yeh Rishta Kya Kehlata Hai.” The serial is the longest-running show from 2016 to 2021. Shivangi Joshi started her career with a lead role in the show Begusarai ; however, she got removed from the TV serial Begusarai because of her not-so-good acting skills and unprofessional behaviour.

Shivangi Joshi belongs to a middle-class family from Pune. Her father, Mr. Sumanprakash Joshi, is a government worker, while her mother, Yashoda Joshi, is a homemaker. Shivangi has one younger sister Sheetal Joshi who is completing her studies, and a brother Samarth Joshi.

She is currently seeing Mohsin Khan, whom she met on Yeh Rishta Kya Kehlata Hai sets. Shivangi is a trained dancer and has participated in many dance competitions. 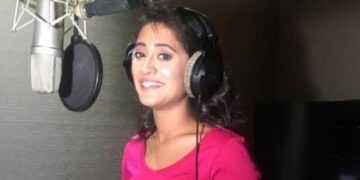