Rajan ji Maharaj is a well-known musical Ramanathan reciter for Maithili and Bhojpuri devotional songs. Premmurti Pujya Sant Shri Prembhushan Ji Maharaj is also his Guru and revered father in the morning, Rajan Ji Maharaj, a well-known musical Ramathan reader who gave music to Maithili and Bhojpuri devotional songs, forced the audience to dance by narrating the story of Ram-Sita marriage in Mohiuddin agar. He was narrating the Fulham episode of Rama and Sita.

He said, when Mother Sita’s friends praised Shri Ram in the garden, she was not able to swell. He narrated the incident – ​​Jhoomat Aavelu Hansat, Khushi Ruke Na Rukavu, Kahu Re Sahelia Kaun Kise Nai Baat Ba. Prior to this, Rajan Ji Maharaj, taking the story forward, said that when Lord Rama came in Sita’s swayamvar and stood thinking of breaking the bow or taunting, he had not used force but intelligence. It has been said that great things are done by intellect, not by force.

The songs/bhajan sung by the Rajan ji Maharaj 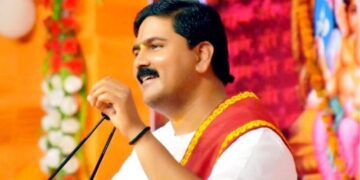