Pardeep Jandli is one of the best Haryanvi singers. He is an Indian-born singer who sings many Haryanvi songs. He is one of the best singers of Haryana in India. Pardeep makes an album in the Haryanvi language. He has been passionate about singing since his childhood and he encourages other singers. He believes in the field of singing the goddess of maa Saraswati sits on his tongue, that’s why he sings in a beautiful voice.

Many songs composed by the famous singer Pardeep Jandli the songs as Chhal Ki Duniya, Ram Bhajan Rhode Rahenge, Ghar ki Baat, Jeete Ji ka Mell these are the songs that have been sung by Pradeep jandli. He is also a bhajan singer he would like to sing bhajan and lokgeet

The songs composed by Pardeep Jandli 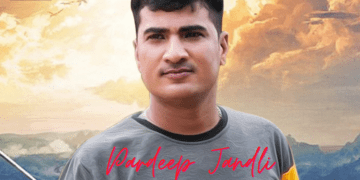