His father wanted him to become an engineer or a doctor as the profession of Qawwali artist had not given a reputed social status at that time. He had started with learning the Tabla from his father but after his father’s death, he had switched to a piece of vocal music and received his training from his paternal uncle Mubarak Ali Khan and Salamat Ali Khan.

In 1971, after the death of his uncle Mubarak Ali Khan, he was appointed as the successive leader of his family Qawwali Party named as Nusrat Fateh Ali Khan-Mujahid Mubarak Ali Khan & Party.

On 16 August 1997, at the age of 48 years, he died because of a major cardiac arrest at Cromwell Hospital in London. 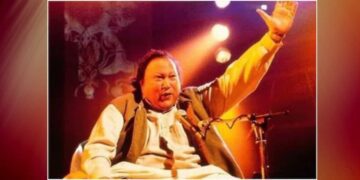