Nikita Gandhi is an Indian female playback singer who works for 5 language film industries in India, (Hindi, Tamil, Telugu and Bengali). She was born 1 October 1991 in Kolkata, West Bengal, she is 30 years old (in 2021). She is popular for her sweet voice singing. She did collaborate with great music composer “A.R Rahman ” in a music project for film I.

She completed her school studie from La Martiniere girls school in Kolkata. Then she moved to chennai to complete her graduate degree in Bachelor of Dental Surgery (BDS) from Ramachandra College, Chennai. She was good at singing from her childhood. She boosted her singing talent from K.M College of Music and Technology.

Nikita belongs to a punjabi-tamil hindu family and She grew up in chennai. Her  father is “Uday Veer Gandhi” and mother is “Nira Gandhi”. Her mother was a dentist therefore she wants nikita to become a good dentist in future. Nikita has one brother named “Niru”

She was part of a choir who had to perform on indo-German program. She released her first music album “Kotha” in bengali language in 2012. She started her official career with the song “Modern Kalyanam” in tamil film “kalyana samayal Saadham” this song was released in 2013. But she became popular with her second song “Ladio” film named “I” directed by great director S.Shankar. She sang all the language versions of this song in 2015. With the song of “Raabta title song in movie ‘Raabta” she made her debut in Bollywood music industry in2017 she also won the award for best female singer of the year for the song of “Raabta title song”. Her bollywood recently songs are “ullu ka pattha” from the film of “Jagga Jasoos” and “Poster lagwa do” from film of “Lukka Chuppi” both are huge hits songs in her career. 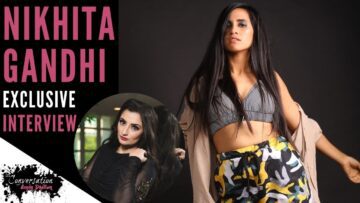