MS Subbulakshmi was born on 16 September 1916 in a temple in Madurai Tamil Nadu and was thus known as Kuzamma in the form of Devaney. He got the rites of devotional singing from there. Subbalakshmi first mass program was at the age of eight during the Mahama ham festival at Kumbakonam. After this program his public round started. Subbalakshmi took Carnatic music lessons from Semmanagudi Srinivasan Ayer. Pandit Narayan Rao Vyas was his mentor in Hindustani music. Subbalakshmi first album of devotional music came when she was only ten years old. After that she joined the Madras Music Academy. His mother tongue was Kannada but he sang in different languages. M / s. In the period when Subbalakshmi started singing and made her place, only male singers dominated, but Subbalakshmi broke that tradition.

Subbalakshmi also acted in films. His memorable film ‘Bhakta Meera’ came in 1945. Meera’s hymns were taken in this film, which was sung by Subbalakshmi. Those hymns are still popular today. Her other films included ‘Seva Sadanam’, ‘Savitri’ and ‘Meera’ in Tamil, but later she felt that she would prefer to work in the field of singing.

The songs sing by the vary famous singer MS Subbulakshmi 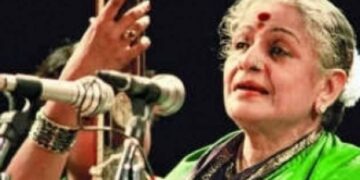