LEKKA is a pop singer-songwriter who recently released her sensational Debut single Ride and Kabeh Traif She was India’s top finalist on South Asia’s biggest English singing show The Stage, Season 3 She’s made a mark in the music scene with her power-packed vocals and exotic stage presence with her 5 piece band Lekka.

She started singing at the age of four. By the time she was seven, she had already hit the stage singing at local competitions.

Over the years, her family’s extensive collection of music exposed her to various genres and helped her develop an eclectic taste. She has also trained extensively under Brazilian Vocal Coach Mony Moon(Simone).

She has made her mark in fashion by modelling for some of India’s finest designers, commercial brands and featuring in TV Commercials. She has also been featured in magazines such as Harper’s Bazaar, Femina, and Vivaha.

She was recently one of India’s top finalists on South Asia’s biggest English Singing Reality show,“The Stage, Season 3.” was aired on Vh1 and Colours Infinity. She was one of the few artists to be featured by Vh1 for “World Music Week’ in June 2018. 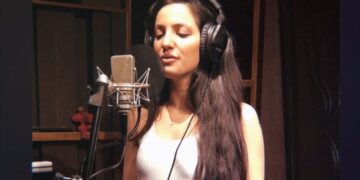