Kashif Ali was born on November 4, 1992, He is a Pakistani vocalist-songwriter and singer. He rose to stardom in 2013 as a finalist on the first season of Pakistan Idol, coming in fourth place.

In 2016, he videoed the song “Mera Mann” for his Bollywood launch movie Laal Rang, which made him critical praise, and thereupon that year he marked his Coke Studio entrance as a featured artist in season 9, as a part of the group Sheraz Uppal

Ali auditioned for the first season of Pakistan Idol in Karachi. Ali passed, the theater rounds, and made it to the Top 24 finalists. In the semifinals of Group 2, he portrayed Javed Ali’s “Mere Maula” and was eliminated on January 19, 2014, but was carried back for Wild Card where he portrayed Kailash Kher’s, “Sayyan” and was protected by the public. Ali was eliminated during the “Top 4” performance after performing Nusrat Fateh Ali Khan’s “Ajaa Teno Akhiyaan” on April 13, 2014. 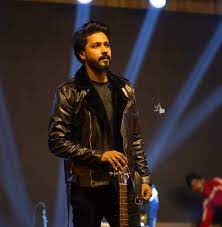