Hrithik Roshan gets his name due to popularity, but in reality, his name is Hrithik Rakesh Nagrath. Hrithik is the most popular Indian actor. He was born on 10 January 1974 in Mumbai, Maharashtra. He is the son of Rakesh Roshan (Filmmaker) and Pinki Roshan. He has an elder sister Sunaina Roshan. He was married to Sussanne Khan in 2000 and divorce in 2014. He has 2 sons who are Hrehaan Roshan and Hridhaan Roshan.

Hrithik was an entry in Bollywood as a child artist at the age of 6. In 2000, he received approx 30000 marriage proposals from his fans on Valentine’s Day.

In the Bang Bang movie, Hrithik is the first actor to do a flying board stunt in Bollywood. He is a certified and professional diver.

He has been awarded many awards in different years, 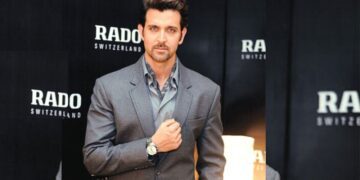