Dua Lipa, who belongs to England, is a renowned singer, songwriter, and model. At the early age of 14, she started to pursue his dream when she launched her musical career by posting covers of songs by other artists on YouTube. Soon due to her musical talent she got the opportunity to join Warner Music Group in 2015. After that, she released her debut single independently.

In 2016, The Fader magazine sponsored a documentary named “See in Blue” which was about Lipa. She also got the honor to receive The EBBA Public Choice Award. Lipa also has made a self-titled debut studio album which was made available for the audience on June 2, 2017.

In 2015, She also achieved a great achievement when her sixth song from the album, “New Rules,” happened to be the first UK number-one single as well as it was also the nation’s first for a female solo artist since Adele’s “Hello”.

Both her YouTube videos “No Lie” and “New Rules” have received over 1 billion views.

Lipa was born on 22 August 1995 in London to Kosovo Albanian parents, who were from Pristina, named – Anesa, and Dukagjin Lipa.

Before going to Kosovo with her family in 2008, Lipa was admitted to Sylvia Young Theatre School on a part-time basis. When Lipa was young she loved to listen to her father singing, who used to perform as a lead vocalist and guitarist for the Kosovan rock group Oda. She started to have great affection for singing by listening to her father, and as a result, she began to pursue her passion at the very early age of five.

She came back to London when she was only 15 years old with a dream of becoming a singer. 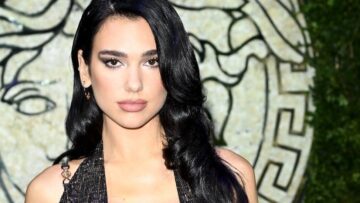