Dhanraj  Joshi  is  a Professional Singer and he is a very famous singer. He is also a musical artist. He sings in various Bhojpuri Rajasthani Films & Albums. He is from Udaipur, Rajasthan.  He always sings the bhakti songs such as mata rani bhajan, nav Ratri bhajan etc. His famous Bhajan Albums like  Manhwa Chod De Mann Ki Masti. Everyone loves the Dhanraj Joshi Rathore because of his voice and his song.  He has been doing stage shows with legendary music composers, lyricists & singers . All people know Rajendra Pansari  because of his popularity.

There are some famous song of Dhanraj Joshi : 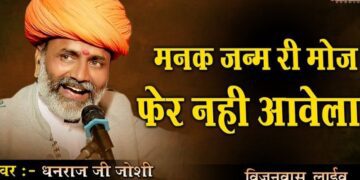