Athar Hayat Nizami is a prominent singer and lead member of the Sufi Hayat Brothers. He started singing at the very young age of 10 years. He got training in classical music from his father (Walid Sahab) Ustad Hayat Nizami. He belongs to Sikandra Gharana and follows classical music only.

Hayat is from the ‘Secunderabad Gharana’. His father started teaching him classical music when he was seven years old & after four years of learning, he came with his first performance at the age of ten and performed in Akbar Hotel singing ‘Parda hai Parda’ in front of “Amitabh Bachchan” chief guest for the occasion. 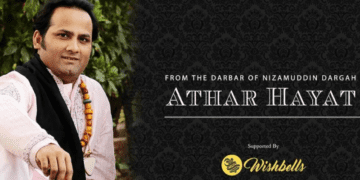