Asha Vaisnav was born on January 2, 1985 in Ahmedabad, the capital of Gujarat. Music was inherited in the family background. Talking about the folk singing bhajan of Rajasthan, the name which is heard everywhere today is the main singer of Rajasthani music world. Has spent more than many years in the Rajasthani music world. Apart from the main name, she is also known as the lioness of Gujarat and the nationalist singer, Swar Kokila, Hindavi Sherni, she has received awards and awards many times as the best singer, along with singing as well as TV presenter and director. have worked

Not only Rajasthan, many states of India, Madhya Pradesh, Delhi, Karnataka, Tamil Nadu, Maharashtra, Gujarat, are also spreading the magic of singing. Ashaji is a prominent face from her talent to her melodious voice. Today, when the name of bhajan singers and singers comes, we give the first place to Ashaji. Recently, on the occasion of Rajasthan Day, on 30 March 2018, a song praising the bravery of Rajasthan was launched on 13 April through the film MAA. Which is making a splash across the state.

The songs sung by Asha vaisnav 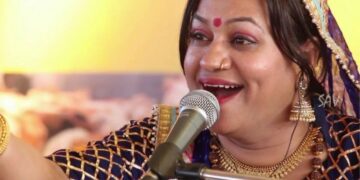