Arman alif is a Bangladeshi young singer and songwriter.  He is popular for his song “ Oporadhi”. He became popular when “Bangladeshi cricketer Shakib al Hasan” uploaded a video on his Instagram where in it,  all his teammates sang this song together in the Trail room. After that Armaan alif got 250+ Million views on his song “Oporadhi”.

He was born on 11 November 2000, in Netrokona, Bangladesh. His mother’s name is Lipi Aktar, He was inspired by his mother to sing. He has one brother and one sister but their names are unknown. He is still single. And he was more passionate about music. Therefore he decided to become a singer at a very young age.

He completed his schooling at Anjuman Model school in Netrokona District.  He graduated from Dhaka Commerce College. After that he realized he wanted to become a singer, so he started learning music and pop singing.

Firstly he started his career by joining one band named “Chondrobindu” in 2017.

He released his first album song “Nikotin ”the very next year. And the second song is “Nesha” in 2018. But these two songs are declared to be average. But his third song “Oporadhi ” made him popular in the Bangladesh music industry. After that, he sings many more hit songs year by year such as Sorbonash, Kotodur, Kacher Janala, Kar Bukete HasoGrihobondi, Nesha, etc. 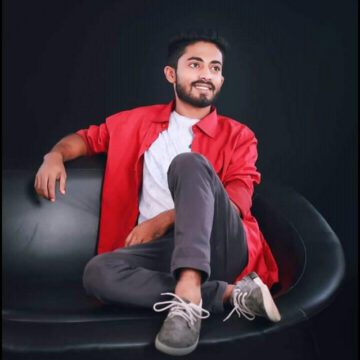