Indian actor and producer Abhishek Bachchan (born 5 February 1976) is well recognized for his work in Hindi movies. He is a member of the Bachchan family and the son of the stars Amitabh and Jaya Bachchan.

Bachchan made his acting debut in the 2000 war movie Refugee, which was followed by a dozen further flops. After Dilip Kumar, he is the only actor to have won three consecutive Filmfare Awards for Best Supporting Actor for Yuva (2004), Sarkar (2005), and Kabhi Alvida Naa Kehna (2006). His career prospects changed with the commercial successes of Zameen (2003) and Dhoom (2004), the latter of which launched his own film trilogy. His largest single critical and financial triumph came with a character largely based on Dhirubhai Ambani in Guru, in which he appeared in 2007. In 2005, he was honored with an Actor Of The Year award from the Stardust Awards for the film Yuva (2007).

Bachchan also received three Zee Cine Awards for Best Actor in a Supporting Role and a National Film Award for Best Feature Film in Hindi for producing the comedy-drama Paa, in addition to his three Filmfare Awards (2009). He has been wed to actress Aishwarya Rai since 2007, and the two of them have a kid. 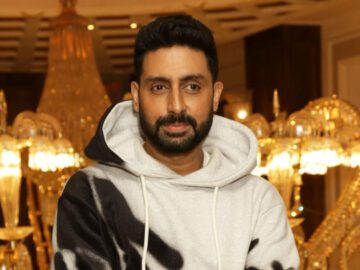